So, what the hell is “friend art,” you ask? Well, as the character Kevin says in the play, “It’s art that only your friends come to see because they have to.”

As a theatre artist, I find this phrase both hilarious and panic inducing. When you create something, your hope is that you’ve made something good, something of value. The idea that all you’re creating is “friend art” is a scary thought that can keep even the most confident creatives up at night.

Let’s face it, we all know how it feels to be invited to a friend’s show that you didn’t exactly dig , and now you are forced to come up with something positive to say about it. Talk about an uncomfortable situation.

And so our story begins….

Friend Art is about four friends who are in very different places in their lives. Molly and Kevin have “normal jobs,” Nate is a semi-famous ex rockstar, and Lil is a performance artist, and let’s just say her friends don’t really get her work. Lil is almost ten years younger than the other characters in the play and she has opted to prioritize creativity in her life, while the others have either said goodbye to creativity, or never explored that part of themselves. Lil and Nate serve as catalysts for Molly and Kevin to begin taking stock of their lives, and wonder if they are on the right paths.

The phrase, “the grass is always greener on the other side” is all too real for us as humans. I recently watched this show on HBO Max called "Atlas of the Heart" featuring a series of lectures by American Researcher, Brene Brown. On this show, she discusses the language of the human experience. There was a topic brought up while watching this show with my partner Christopher, that for me, explored the overarching theme of Friend Art. That topic was comparison. We as humans have an innate inclination to compare ourselves to others. It’s especially challenging not to nowadays when we are constantly bombarded with different people’s lives on social media. It seems like the algorithm is designed to make us feel like our life isn’t as extraordinary as someone else's, because, well... then of course we will be convinced to purchase products, or services, or plan vacations that will make our lives more extraordinary, right?

Brene says that, “Comparison is the crush of conformity from one side and competition from the other—it’s trying to simultaneously fit in and stand out,” and it tells people to “Be like everyone else, but better.”

It’s a scary thing to “grow up.” I remember being a kid and feeling like time couldn’t move fast enough. All I wanted was to become an adult so I could start having certain kinds of experiences. Then when I became an adult, time seemed to start moving too fast. Comparison occurs all throughout your life. When you’re a kid you wonder things like, “Am I as pretty as she is?” or “Did I get as many Christmas presents as my sibling?” Then when you become an adult, you start wondering things like, “Am I where I should be at this age?” “Have I achieved enough?” “What is my purpose in life?” And it’s easy to look at your friend’s lives and wonder, “Is my life as fulfilling as their life?”.

Comparison can really mess with us when we are feeling lost, insecure, or anxious, and then the inevitable happens: we begin questioning our life choices. That is exactly what happens to Molly and Kevin in this play. They have reached a precipice where they now have to decide if they are ready to let go of who they used to be and move into the next big stage of their lives.

Did I mention this play was a comedy? I feel like I’m bringing everybody down. My bad 😆 .  Hey, we all know that comedy works best when it comes from a place of truth. And the truth is, life can fucking suck sometimes. Watching a person struggle with those internal demons can be funny because it’s relatable and it’s really one of the building blocks of comedy. Sitcoms certainly wouldn’t exist without it.

My hope is that this play speaks to everyone in some way. Maybe it will inspire you to explore something new in your life that you’ve always wanted to do. Because everyone deserves to live their life without regrets. Life is too short to not be your most authentic self.

The land the PNC Arts Annex in Dayton, Ohio is built upon is home to the following indigenous tribes: Kaskaskia, Osage, Shawanwaki/Shawnee, Myaamia, Adena, & Hopewell

ClickTap on an artist to view their bio.

Check out our official Spotify Playlist for the show and access all of our past playlists from our profile.

This show wouldn't be possible without the generous support of our community.

- Thank you to Ascend Innovations for providing us with Nate's coffee table.

Support the future of theatre in Dayton

We're SO glad you're here, but real talk... ticket sales alone aren't enough. The only way we can continue creating innovative theatre is with the support of our community and awesome people like you.

Here are a few things you can do to help keep us around:

“Friend Art” is presented by arrangement with Concord Theatricals on behalf of Samuel French, Inc. www.concordtheatricals.com

Other shows this season 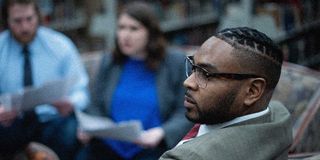 Drop us your email below to stay up-to-date with all the cool stuff we've got going on. We promise not to spam you!